The Unfortunate Beginning of Our Trip to Alaska 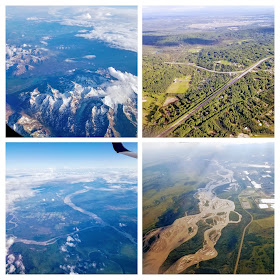 Thank you all for your very kind comments and prayers on my last post. My husband is doing well and almost completed his cancer treatment.  We feel fortunate it was discovered in an early stage and he should have full remission.

Visiting Alaska was on my husband and my bucket list for many years. We heard so much about going on both a land and sea cruise version of the trip from many friends that traveled that way, so that is the type of trip we planned. It was with great anticipation that we left our home at 6am on an early June morning to fly from Denver, Colorado to a connecting flight to Minneapolis, Minnesota, and then on to Fairbanks, Alaska! As we approached Alaska and began to descend in altitude I took the photos above from our airplane window. Seeing so much green was a surprise!  It turns out we were going to have many surprises in Fairbanks. 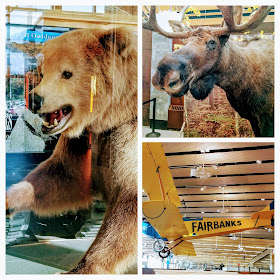 When we landed in the Fairbanks International Airport we went through the usual picking up of luggage from the carousel and met the representatives from the cruise company who then took our luggage to be brought ahead to the lodge where we would be staying. We were then told to wait in an area for the buses that would be transporting us to the lodge. It seemed the wait was taking a long time and everyone in the group--there were about 30 fellow travelers gathered at that time-- we were all getting a little restless wondering why the buses were so late? We had arrived a day before the official beginning of the land portion of the trip as we had planned an excursion flight to visit the Arctic the next day.  Others in the group also had excursions planned, or just wanted to make sure they arrived safely before the official beginning of the trip.  Finally, a representative of the cruise company gathered us all to tell us the bad news. There had been a fire in the kitchen of the lodge, and the damage was so bad that the Fairbanks fire chief would not allow anyone back to occupy the lodge. Happily, no one was hurt, but now all the guests, including us as new arrivals, had no place to go at that point. 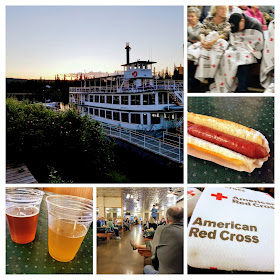 After about two hours, a bus finally came to take us to join all the other displaced guests to a large cafeteria that was part of the Riverboat Discovery tour we were all scheduled to take as part of our land tour. The Red Cross was there handing out blankets as some guests had evacuated the lodge in their pajamas or were shoeless, and in the late hour the temperature was in the chilly '50s, although the sun was still on the horizon as we were in the "land of the midnight sun."  It was a slightly chaotic scene to be sure, but everyone was in good humor at first.  We were offered a hot dog and water or beer while in the cafeteria,  Every now and then a cruise representative would stand up on a bench and announce by name a group of people and the hotel they were going to be bused to.  My husband and I waited and waited and waited. Finally, at around 4:30 in the morning we were in the last group to be told we were going to be transported a half-hour away to the town called the North Pole.  I wish I could have shown photos of what must have been a charming town, but by this point, I was too exhausted to care.  We all had to wait online another hour to check in on arrival to the hotel, and did not get to sleep until after 6:30 am--without our luggage or toiletries. We were also told that checkout was 11am, so we had to be awake by then.  Needless to say, this was not how we expected to begin our trip! 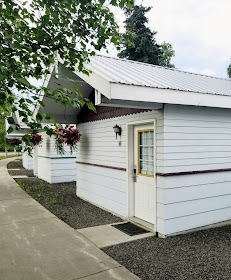 The next morning we gathered in the hotel lobby after check out (after no breakfast or even coffee) to be told we were going to be transported back to Fairbanks and dispursed to different hotels in the area. My husband and I were still exhausted, as we did not sleep well in the four hours we were allotted.  We bordered the buses again and eventually were left to check in to a riverside cottage-type hotel in Fairbanks, where we would be staying for the next two days. The accommodations were cozy and clean, but it took quite a while for the rooms to be made available before we could check-in and we did not receive our luggage until very late in the day.  We had to wait in the main lounge of the complex all day.  Because of all this confusion, still feeling exhausted, and because my husband's coat was in our luggage that had not yet arrived, we had to cancel our excursion flight to the Arctic, which was a big disappointment for us. That was going to be a special treat and splurge to celebrate my husband's 70th birthday.   Hopefully, one day in the future, we will be able to fulfill this dream, but for whatever reason, fate had it that it was not supposed to happen on this trip. 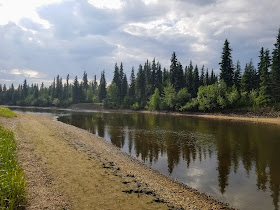 Although the temporary accommodations were comfortable, there wasn't much to do during our stay. This location was somewhat isolated and we had no means of transportation.  All we could do was take a walk along the nearby Chena River... 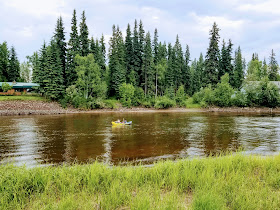 ...and watch some of the river traffic going by.

We also met many other travelers staying at the hotel who were from all around the lower 48 states, and by the end of the cruise, we felt like old friends! 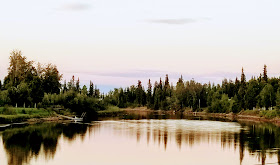 This may not have been the beginning of a long-awaited trip to Alaska that we had anticipated so long, but we were cognizant that anything can happen in life and we were healthy, safe and still going to enjoy the rest of the trip.

I'm sure you are wondering were we compensated for all our inconveniences? Yes, but not as much as we hoped.  Our excursion fee was refunded, although that took many weeks to occur, and the cruise company gave all guests involved in this incident onboard credit to use on the cruise ship.  I'm sure the cruise company (who I am not naming on purpose) felt they did all possible to resolve a difficult and unexpected situation.  What do you think?

If you saw my prior post Postcards From Alaska you will see we did end up having a wonderful trip and I'll show more about it in my next post.  Thanks for reading this long post!

ou can also find me on

Thank you for your comments! I always appreciate hearing from visitors to my blog.